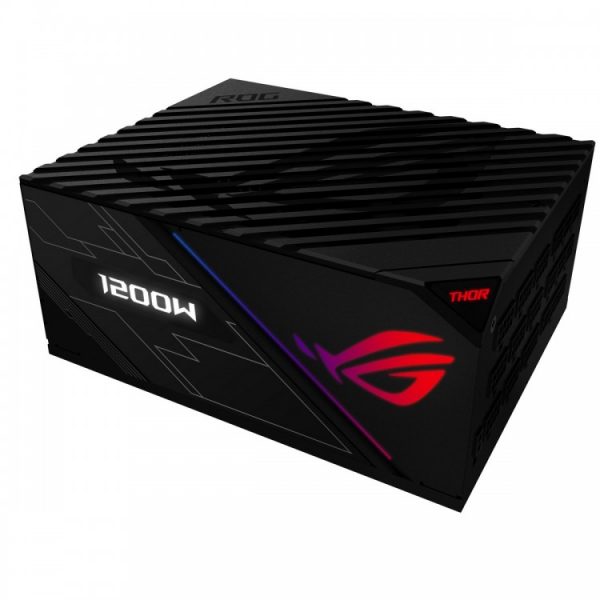 The ROG Thor 1200W Platinum is the PSU for PC enthusiasts who demand aesthetic excellence and performance perfection. Our first PSU is packed with innovative ideas, including Aura Sync RGB illumination, an integrated OLED information panel, a dustproof Wing-Blade fan, and a large heatsink that enables 0dB operation at higher power draw than typical designs. It also integrates trusted, durable components, like Japanese-made capacitors, to achieve an 80 PLUS® Platinum efficiency certification.

From custom cooling to cutting-edge aesthetics, the ROG Thor series demonstrates the power of ROG engineering by merging technologies that have been researched and refined throughout the ROG ecosystem, including our award-winning graphics cards and motherboards.

In a PSU, component heatsinks are vital when optimizing thermal efficiency. The ROG Thor 1200W Platinum features custom ROG heatsinks that boast 2X more surface area than standard designs, and the ROG Thor 850W is similarly equipped. Having larger heatsinks and other premium components means cooler operation under load, an extended lifespan for key components, and silent operation long after standard designs spin up their fans.

When demanding games kick your system into high gear, a good PSU needs a well-designed fan to keep components cool without adding noise. The ROG Thor series PSUs are equipped with a patented 135mm Wing-blade fan design that can also be found on some high-end ASUS graphics cards. The design offers increased static pressure to cool components efficiently at lower RPMs than a traditional fan, and is certified IP5X dust-resistant to ensure a long lifespan. By engaging the rear-mounted 0dB switch, the Wing-blade fan can stop completely when temperatures are low. With 80 PLUS Platinum certification, 100% Japanese capacitors and other premium components, the ROG Thor series is designed to run ROG rigs quietly and efficiently for years.

ASUS has recently brought embedded displays to ROG motherboards, CPU coolers, and now to PSUs. ROG Thor is the first consumer PSU series to feature an integrated OLED Power Display that shows overall system power draw in real-time, so users can easily monitor how much power the system is pulling, without requiring resource-intensive software utilities.

Modern enthusiast PCs are typically designed to show off the high-end components inside, as well as the builder’s customization efforts. The ROG Thor series has been crafted to complement showpiece systems with an aesthetically pleasing design at every angle. Addressable RGB LEDs that light up the ROG logo on the front can be controlled through a compatible ASUS motherboard and Aura Sync software. Premium sleeved cables and cable combs are included in the box so system builders can immediately create a stunning build. We’re so confident about the reliability of the ROG Thor 1200W Platinum that we back it with a 10-year* worldwide warranty.