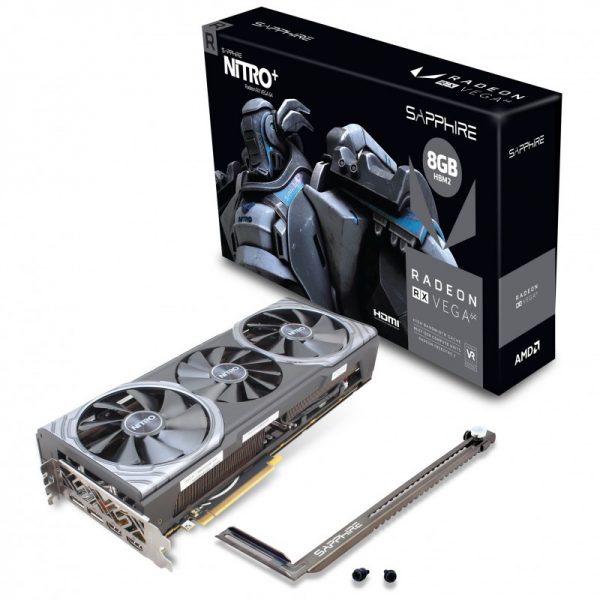 The SAPPHIRE NITRO + cards come with Dual HDMI ports, specifically designed to work with VR. By having two HDMI ports, you can have both an HD monitor and cutting-edge VR headset running at the same time. The ports are HDMI 2.0b, the latest update, with an 18Gbps bandwidth, up to 32 audio channels, and is able to support 4K 50/60 resolutions like 2160P, whilst remaining entirely backwards compatible with older HDMI specifications.

The graphics card is more than another component; it’s the beating heart of your gaming system. It should look as good as it costs. With tasteful shroud design augmented by RGB LEDs, each card is practically a piece of art. You can even change the colors of the LED, for your own customized design. This can be controlled via software using the latest version of SAPPHIRE’s Award Winning Overclocking Utility – TriXX. If you prefer, LEDs can also be turned off.

The SAPPHIRE NITRO+ cards are designed with robust VRM cooling and have a high thermal conductivity pad on the back-plate to take away the heat efficiently and effectively.

Our Black Diamond Chokes are 10% cooler and 25% more power efficient than a normal choke – and these Chokes reduce the coil temperatures by other 15% over the former one. These exclusive chokes will maintain gaming stability using their built-in heatsinks and help minimize coil whine.

In order to protect your card, the SAPPHIRE NITRO+ series cards have fuse protection built into the circuit of the external PCI-E power connector to keep the components safe.

These feature Dual Ball bearing fans, which have an 85% longer lifespan than sleeve bearings in our tests. The improvements to the fan blades means the solution is up to 10% quieter than the previous generation.