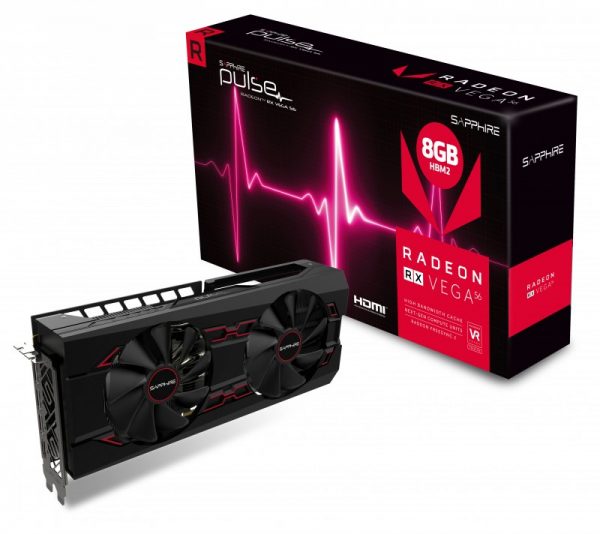 The base of the new SAPPHIRE PULSE graphics card is a powerful Radeon RX Vega 56 chip featuring 3584 Stream Processors running with a factory-overclocked 1512 MHz Boost Clock. 8 GB of 2nd generation High Bandwidth Memory is clocked at 800 MHz (1600 Mbps Effective). Using a switch on the top of the card the user can choose a second UEFI BIOS with an efficiency preset, resulting in slightly lower clocks but also lower temperatures and power draw resulting in a quieter cooling.

To effectively cool a factory-overclocked GPU, SAPPHIRE is using a large heatsink with a copper base and a set of four 8 mm heatpipes. The card’s heatsink actually extends past the short PCB for an increased heat dissipation area. A robust cooling module is also applied to the VRM section, with separate heatsink units connected by a single 6 mm heatpipe and aluminum base. There is also a high thermal conductivity pad on the backplate. Two efficient dual-ball bearing fans spin at a nominal speed of up to 1650 RPM, maintaining a great airflow and quiet operation. Intelligent Fan Control III system ensures the fans start precisely at 55 degrees Celsius, providing a passive, noiseless cooling in idle.

The SAPPHIRE PULSE Radeon RX Vega 56 is a cohesively designed product, with the fan shroud, the aluminum backplate and the back heatsink frame all accentuating the series’ unique style.