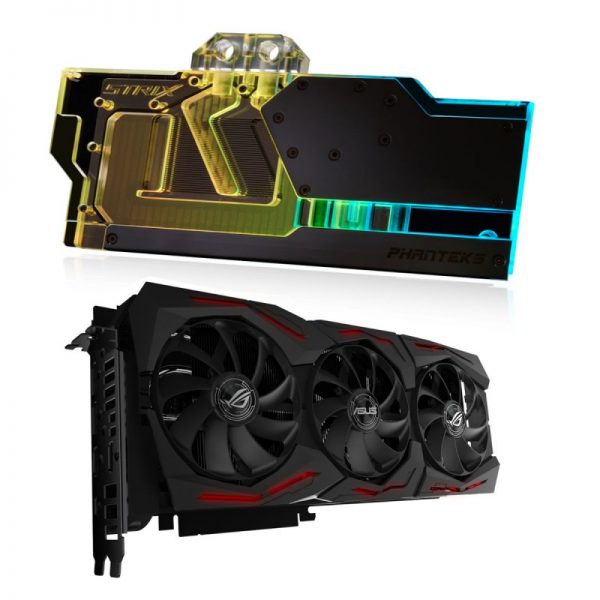 H2O Custom Graphics Cards are professionally installed by watercooling experts who ensure that your hardware is handled with extreme care and pre tested to ensure that it arrives to you in full working order. We install the performance processor of your choice and use premium ‘Thermal Grizzly’ non-conductive Thermal Materials to enhance the cooling capabilities of the Graphics Card VGA Cooling block and keep your hardware safe.

Included in the installation is precision installed performance thermal pads on all graphics card hot spots including the memory modules and VRM that will increase the thermal conductivity of the Graphics Card Block and allow maximum heat transfer from your performance hardware into your custom watercooling setup.

To install and run an H2O Custom Graphics Cards in your system, you will need to use appropriate watercooling hardware to support the cooling potential of the block.

These figures should be used as a rough estimate and we suggest that if adding more items into your watercooling loop that you take appropriate measures to enhance your cooling system.
H2O Custom Graphics Cards provide the perfect platform for GPU overclocking by giving your Graphics Card optimised running conditions to perform at its best and allow you to overclock your system to higher frequencies whilst keeping the Processor and power array on your Graphics Card at a lower operating temperatures.

The Glacier G2080Ti STRIX from PHANTEKS is a premium, high-performance waterblock made for the latest Asus RTX 2080/2080Ti STRIX cards. The waterblock features an optimised channel structure and nickel-plated copper base, which ensure that the GPU, VRAM and VRM are cooled effectively. The Glacier also has a unique and elegant look thanks to its cover which is made from acrylic glass and anodised aluminium.

The GeForce RTX 2080 Ti ROG STRIX O11G represents the cutting edge of graphics card technology. The TU104 GPU of the RTX 2080 is built on the Turing architecture, utilises the new 12 nm FinFET manufacturing process with the TU102-300 graphics chip in addition to GDDR6-VRAM to make for a significant leap forward in terms of speed when compared to the 10- series. The reason behind the name change to “GeForce RTX” lies in the deployment of Ray-Tracing Technology, this unlocks incredibly realistic lighting and shadow effects.

The ASUS NVIDIA GeForce RTX 2080 Ti ROG STRIX O11G has a Base Clock of 1.350 MHz. When under heavy loads, the clock frequencies of the graphics chip increase automatically up to a Boost Clock of up to 1.665 MHz. The innovative and incredibly fast GDDR6-VRAM is clocked at 7.000 MHz (14.000 MHz effective), meaning that the 11 GB of VRAM is sufficient for 4K-resolution gaming as well as making immersion in Virtual Reality a treat for the senses. In terms of the cooler design, a triple-fan design is utilised.